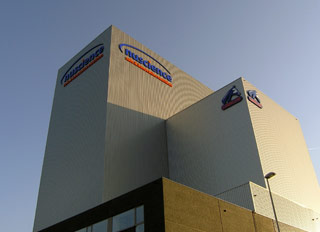 Today marks the official opening of the Nuscience Group’s brand-new, state-of-the-art plant in Drongen (Ghent), Belgium. This new plant will replace the current production sites in Drongen and Baasrode and thus represents a major simplification of the production logistics. The plant will also double the current production capacity to more than 10,000 tons per month. In addition, Patrick Keereman, current CEO of the Nuscience Group, will pass on the torch to Johan De Schepper, who joined the company two years ago as COO.

The new plant in Drongen will do more than provide the needed increase in production capacity – this ultra-modern infrastructure also makes it possible to produce Nuscience Belgium’s entire product portfolio at one location. This versatile plant thus signifies an important improvement in the company’s internal logistics.

Thanks to its extensive automation and introduction of new processes, the new plant is uniquely state-of-the-art. Various best practices and innovations from other sectors have been applied to the plant in an inventive manner. Furthermore, the process configuration and the silo park provide the flexibility to quickly respond to market demands and changing technologies within the ingredient and premix sector.

Supporting international expansion
The Nuscience Group started construction of the new plant at the end of 2013, working with a select group of sub-contractors to build the plant on its own initiative. Coming on the heels of the previous commissioning of the new plant in Tianjin, China, this new plant in Drongen is an important step in further optimising the Group’s production. The plant is also an important component in the Group’s active investment strategy for supporting its international expansion.

For Patrick Keereman, current CEO and architect of the international expansion and growth of the Nuscience Group, the opening of this new plant is also the occasion to announce the appointment of Johan De Schepper as his successor.

Smooth transition of leadership
Johan De Schepper has held the position of Chief Operating Officer at the Nuscience Group since joining the company two years ago. Johan began his career in the agricultural sector, working for the Amylum Group (later Tate & Lyle), where he held various international management positions and fulfilled group responsibilities. After an eight-year stint at a venture capital group connected to the University of Leuven (KULRD), he became responsible for managing and restructuring the INVE Group (premixes, aquaculture and additives). The sale of the former Spanish INVE premix branch to Nuscience (then called Vitamex) laid the foundation for the professional and amicable relationship with Patrick Keereman. Johan joined the company in September 2013 so that he could take over the helm from Patrick today.

Patrick Keereman began his career as General Director of the former Vitamex in 1989 with the acquisition of the Baasrode production site. In 1992, the company invested in a new plant here in Drongen and settled into its current headquarters. Distinctive milestones in Patrick’s career have included: the start-up of activities in China in 1996, the management buy-out in 2002, and the arrival of an industrial partner, Cehave Landbouwbelang (in the meantime renamed Agrifirm), in 2005 as the majority capital shareholder. The Nuscience Group grew quickly, and under Patrick’s leadership the company’s revenue increased 10-fold over the course of 10 years. We wish to extend our sincerest gratitude to Patrick Keereman for his dedication and achievements in placing the Nuscience Group solidly on the map.