Feed Mill to be built in West Halmahera

Local Company Kie Raha Mandiri (KRM) have announced plans to set up a feed mill in West Halmahera to support the development of livestock business in North Maluku province.

KRM Perusda director Syamsir Andili in Ternate, said on Friday, "the development of livestock business in North Maluku, especially breeding laying hens and broilers in large scale production, is difficult due to the high prices of feeds."

The farmers in Malut have to bring in fodder from outside of North Maluku, such as from South Sulawesi and East Java at higher prices, because it must be coupled with freight, so that local farmers are only able to buy in limited quantities.

"That's why Malut during this time to meet the demand for eggs and poultry meat mostly have to bring it from outside Malut. Eggs for example had approximately 50 tonnes per month," he said.

Therefore, Perusda Kie Raha as belonging to the provincial government Perusda Malut feel compelled to support the development of animal husbandry in this area, in particular farms laying hens and broilers by building a feed mill.

He said the animal feed factory will be built will mostly use local raw materials, so that later selling price is much cheaper than the price of animal feed imported from outside North Maluku.

With animal feed prices that are inexpensive and available at any time without expensive freight charges, it is expected to encourage entrepreneurs in the area to develop chicken farms on a large scale, because this business in North Maluku has a very good prospect.

Alluding to the value of investments and production capacity of the feed mill to be built in the West Halmahera, Syamsir Andili did not elaborate exactly, but specifically for its production it will certainly be able to meet the needs of animal feed in the area. 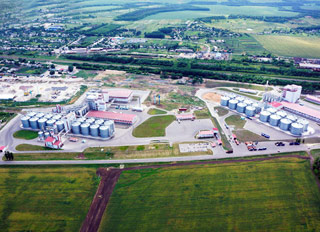