Germany -- Despite the existence of clear warning labels, the feed manufacturer in the state of Schleswig-Holstein used fatty acids intended only for technical industrial uses such as making lubricants, a spokesman for the Federal Office of Consumer Protection and Food Safety (BVL) told daily Westfalen-Blatt.

The manufacturer at the centre of the scandal, Harles & Jentzsch, based in the city of Uetersen, admitted it had made a mistake. It stated it had for some years been buying by-products from the manufacture of biofuel and processing them to make feed.

“We were careless about the assumption that the mixed fatty acid that arises during the manufacture of palm, soya and rapeseed oils, is suitable for manufacture of animal feed,” the company’s head, Siegfried Sievert, told the Westfalen-Blatt.

The firm explained that dioxin originated from the fatty acids of a plant belonging to the biodiesel firm Petrotec in the Lower Saxony city of Emden.

Petrotec stated on Monday night that the fatty acids, supplied to a Dutch firm, had been approved for use only in industry and not for feed manufacture. That product was then supplied to Harles & Jentzsch.

Authorities in several states took dramatic action Monday to limit the damage. About 1,000 poultry, pig and turkey farms in Lower Saxony were quarantined. About 8,000 egg-laying hens were destroyed in North Rhine-Westphalia.

The state prosecutor in Itzehoe, Schleswig-Holstein, was investigating whether any crime had been committed.

“We are examining whether a criminal offence exists,” said prosecutor Ralph Döpper.

But the Federal Institute for Risk Assessment (BfR) said there was at the moment no risk to consumers.

“An acute health risk does not exist,” said a spokesman.

The federal parliament or Bundestag is to discuss the implications of the contamination.

“We have to involve ourselves,” the chairman of the food, agriculture and consumer protection committee, Hans-Michael Goldmann, told the daily Ruhr Nachrichten. “The topic of dioxin of course rings alarm bells.”

The chairman of the Lower Saxony Poultry Industry Association, Wilhelm Hoffrogge said the swift measures taken by authorities such as closing many farms had been “appropriate.”

He told the Osnabrücker Zeitung that the situation did not, however, threaten the existence of the state’s poultry industry.

A spokesman for the Finance Ministry in Berlin said: “The important thing is that contaminated food is secured and affected products do not reach retailers.” 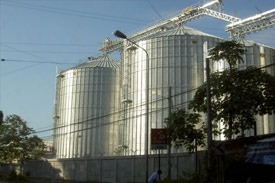