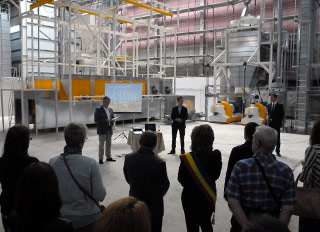 The feed mill located in Sibioara is part of a larger project of Premium Porc Group of modernization and expansion of the farms operated in Constanta district, part of Degaro company. The project extended over a period of two years and consisted of increasing production capacity of the farms Fantanele and Sibioara and building a new Feed Mill. Total investment amount for all the steps of the project was approximately EUR 23 million (USD$26 million).

Attending the inauguration, Lars V. Drescher, CEO of DCH International said that he feels proud of what the company has achieved in Romania “especially regarding Degaro project”.

“During the project we had close cooperation with central and local authorities, but also with those who participated in the project – construction companies and financial banking institutions. With the completion of this project we feel that we have developed a durable connection between Premium Porc Group and the partners involved. We trust that in the future everyone will benefit from this relationship “, said Lars V. Drescher.

Referring to plans for the coming years, Lars V. Drescher added: “We have an ambitious strategy – to continue the company’s development and production to double Premium Porc Group, by 2019”.

Present at the inauguration of the feed mill in Sibioara, Carsten L. Pedersen, chairman of the board of DCH International said that the development and doubling in production of the company Premium Porc Group has become a priority for the Danish investors. “We strongly believe in the future of Romania and the future development of Premium Porc Group in Romania,” said Carsten L. Pedersen. Besides representatives of major banks in Romania, representatives of the decentralized public services of the County, the mayors of Mihail Kogalniceanu and Fantanele attended also to the event.

Daniela Ancuţa Belu, mayor of Mihail Kogalniceanu, the village area where the feed mill factory, thanked Premium Porc Group for the investment made in Sibioara. “It’s an investment which is supporting businesses in the area, new jobs for the locals, but also an important contribution to the local budget through the taxes that the company pays”, said Daniela Ancuţa Belu.

On his turn, George C. Popescu, mayor of Fantanele congratulated Premium Porc Group for modernization and expansion in Constanta County, as well as for the feed mill’s inauguration.