At last week’s Dairy Business Association conference in Madison one of the featured speakers, on the program to discuss the upcoming Farm Bill, spent most of his talk on ethanol and its detrimental effects, for livestock producers, on corn prices.

“Ethanol is a ticking time bomb blowing up in the faces of poultry and livestock producers,” said Ben Yale, senior partner at Yale Law office, Waynesfield, Ohio. Yale is a nationally recognized expert on dairy law, regulation and ag policy.

Yale pointed at the federally mandated 45 cents per gallon blender’s credit as having a serious impact on corn prices. Every gallon of gasoline must contain 10 percent ethanol, mostly created from corn. He noted the policy is eating up a third of the U.S. corn crop, with no sensitivity to price. He said the federal government had set a goal to have cellulosic ethanol supply 50 percent of that fuel, but technology has not kept time with the goal, so that federal mandate was reduced by 95 percent.

“This government program burns corn in gas tanks while people in the world are starving,” Yale said.

The United States Department of Agriculture’s (USDA) Economic Research Service released a report in 2008 that reported feed costs for livestock, poultry and dairy reached a record high of $45.2 billion - an increase of more than $7 billion over 2007 costs. Further, a Sept. 2008 Congressional Research Service report stated that the dramatic increase in livestock production costs was attributed to feed. According to the National Cattlemen’s Beef Association (NCBA) the cattle feeding sector has lost $7 billion in equity from Dec. 2007 to Feb. 2010 because of high feed costs and economic factors that have negatively affected beef demand. Between 2005 and 2008, corn prices quadrupled, reaching a record of more than $8 per bushel.

The blenders credit is set to expire on Dec. 31. Livestock groups, such as NCBA are urging Congress to let the tax credit expire, saying the blender’s credit and the import tariff give the corn-based ethanol industry a distinct competitive advantage over other end-users of corn and that the subsidies have had significant negative economic impact on cattle producers. The ethanol industry is urging Congress to extend the blender’s credit.

Yale acknowledged in his presentation that corn producers have a right to a profitable crop as much as dairy or livestock and that there are useful byproducts to livestock from ethanol production, such as distillers grains, but the federal policy has upset a delicate balance in agriculture pricing.

“The economy is an ecosystem and ethanol is an invasive species.” 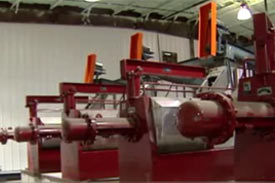