SealesWinslow, a New Zealand animal feed company, has expanded its its Ashburton and Waikato operations by purchasing from Inghams the closed feed mill and grain storage facilties in Whanganui.

The company has stated that they plan to redevelop the site and install modern feed milling equipment, so that the new feed production line will be ready in time for the start of the 2013-2014 dairy season.

CEO of the company, Graeme Smith stated that the multi-million dollar feed mill development was in line with SealesWinslow wanting to be a national business for dairy, sheep and beef farmers and wouldn't be the last investment that the company would make.

"That is not just $2 million, it's a big development and we will put a new mill in there, most likely from Europe, and put in storage and distribution facilities."

Smith stated that the company have now positioned themselves in high-growth dairying areas. "A large percentage of our business is in dairying and that will drive growth, although we still provide feed to drystock."

SealesWinslow was conceived in 2011 when Ballance Agri-Nutrients purchased a 51% shareholding in Seales in Morrinsville, along with Winslow Feeds and Nutrition in Ashburton.

Its Ashburton site will provide molasses blocks to New Zealand outlets and pelleted compound feeds to the South Island,while its Whanganui and Waikato plants will produce the same product for the North islands.

The company has been investing in getting rid of bottlenecks at the Ashburton production plant and upgrading it to be more efficient. Distribution networks have also been expanded to Southland and Bay of Plenty.

Ballance Agri-Nutrients CEO Larry Bilodeau told that the expansion backed up Ballance's objective to make a complete nationwide business in farm nutrients, all the way from pasture to supplements.

Smith said the lower payout estimate for this quarter and a low 2012-13 start may act to assist the company with farmers looking for an increase in milk production as prices declined.

The new upgraded feed mill should be finished before mid-2013 while its distribution operations to supply product in the lower North Island should be in place soon. 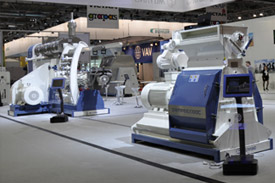 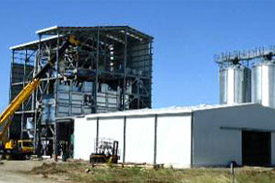