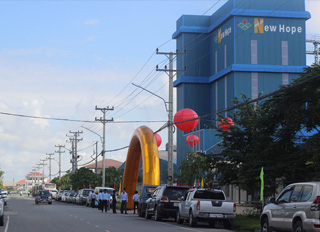 The opening ceremony of the feed mill was conducted under the presidency of H.E. Veng Sakhon, Minister of Ministry of Agriculture, Forestry, and Fishing, presence of the Company's high-level managements and staffs, as well as many other distinguished guests from government and private sectors.

The ribbon-cutting ceremony was attended by Du Jiang Ping, director of New Hope, and Veng Sakhon, minister of agriculture, forestry and fisheries (MAFF). In his speec, Mr. Du Jiang Ping, said New Hope Group had been engaged in agribusiness since 1982. The company has been known as the largest feed producer in China and among the top-3 worldwide with annual production capacity of over than 20 million metric tons per annum.

In addition, the company has extended the success to various businesses ranging from mill products, real estate, finance, chemicals and etc. The company reported the total sales revenue of 10 billion Yuan in the year 2015. Since 2010, New Hope Cambodia has committed to "Deliver the benefit to farmers, bring consumers the happiness".

Sakhorn welcomed the new factory and was quoted as saying this was in line with the government's 2014-2018 agricultural policy, and would create more local jobs.