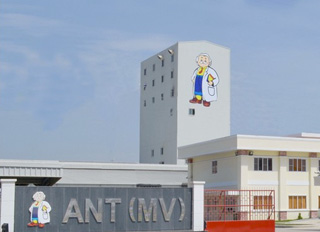 Early last month ANT signed a long-term lease to operate a factory on 2.8 hectares of land in Phnom Penh Special Economic Zone. Operations at the feed mill are expected to start in the first quarter of 2019 after a 14-month construction period.

Senior manager of Phnom Penh SEZ, Michelle Zhao, said ANT had up til now been exporting its feed products into Cambodia from a feed mill based in Vietnam. The company is now looking to take a greater stake in Cambodia's fast-growing market by producing the feed locally in the country. The company joins two other animal feed producers in Phnom Penh SEZ, namely China's New Hope and Thailand's Betagro.

According to Zhao, ANT will source the materials for animal feed both domestically and abroad to produce its three signature brands: Red Star, DaChan and Dr Nupak. The new feed mill will have an annual production capacity of 144,000 tonnes and is expected to employ 150 workers.

ANT is one of five companies to sign lease agreements with Phnom Penh SEZ since the start of the year. The activity has given a boost to the firm that operates the special economic zone, which has struggled to bring in new high-profile investors since listing on the Cambodian stock exchange in May 2016. Phnom Penh SEZ was established in 2006 on 357 hectares and has a total of 88 registered tenants.