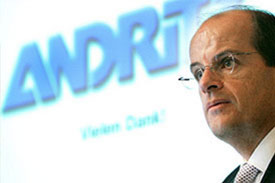 Austrian machinery maker Andritz will reach its goal for annual revenue of € 4.5 billion in 2011 at the earliest according to Chief Executive Wolfgang Leitner.

Andritz’ main activities are in hydro power (30%) and pulp & paper (41%). The Feed & biofuel group takes about 4% of total business. In the feed business Andritz is known for the Sprout Matador pelleting and expansion equipment and Paladin pellet mills.

"We certainly won't reach this revenue goal in 2010," Leitner said in a briefing during the company's Capital Markets Day. "It's possible that it will be delayed by one or two years," he said.

Leitner reiterated the company's 2009 guidance of a 15% revenue decline and a lower net profit.